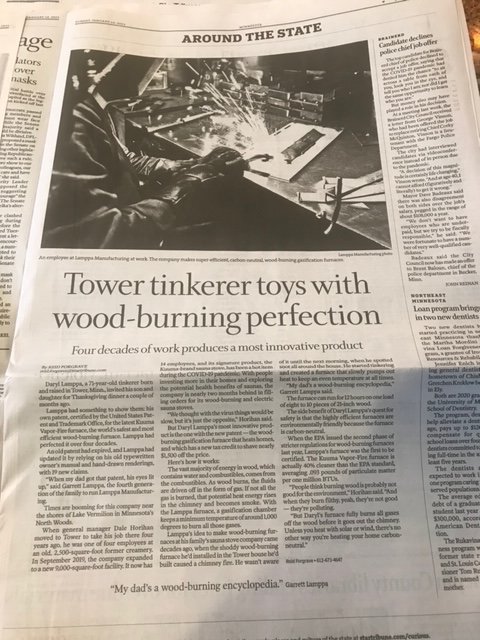 Four decades of work produces a most innovative product

Daryl Lamppa, a 71-year-old tinkerer born and raised in Tower, Minn., invited his son and daughter for Thanksgiving dinner a couple of months ago.

Lamppa had something to show them: his own patent, certified by the United States Patent and Trademark Office, for the latest Kuuma Vapor-Fire furnace, the world’s safest and most efficient wood-burning furnace. Lamppa had perfected it over four decades.

An old patent had expired, and Lamppa had updated it by relying on his old typewritten owner’s manual and hand-drawn renderings, with 19 new claims.

“When my dad got that patent, his eyes lit up,” said Garrett Lamppa, the fourth generation of the family to run Lamppa Manufacturing.

Times are booming for this company near the shores of Lake Vermilion in Minnesota’s North Woods.

When general manager Dale Horihan moved to Tower to take his job there four years ago, he was one of four employees at an old, 2,500-square-foot former creamery. In September 2019, the company expanded to a new 9,000-square-foot facility. It now has 14 employees, and its signature product, the Kuuma-brand sauna stove, has been a hot item during the COVID-19 pandemic. With people investing more in their homes and exploring the potential health benefits of saunas, the company is nearly two months behind in filling orders for its wood-burning and electric sauna stoves.

“We thought with the virus things would be slow, but it’s just the opposite,” Horihan said.

But Daryl Lamppa’s most innovative product is the one with the new patent — the wood-burning gasification furnace that heats homes, and which has a new tax credit to shave nearly $1,500 off the price.

Here’s how it works:

The vast majority of energy in wood, which contains water and combustibles, comes from the combustibles. As wood burns, the fluids are driven off in the form of gas. If not all the gas is burned, that potential heat energy rises in the chimney and becomes smoke. With the Lamppa furnace, a gasification chamber keeps a minimum temperature of around 1,000 degrees to burn all those gases.

Lamppa’s idea to make wood-burning furnaces at his family’s sauna stove company came decades ago, when the shoddy wood-burning furnace he’d installed in the Tower house he’d built caused a chimney fire. He wasn’t aware of it until the next morning, when he spotted soot all around the house. He started tinkering and created a furnace that slowly pumps out heat to keep an even temperature at all times.

The side benefit of Daryl Lamppa’s quest for safety is that the highly efficient furnaces are environmentally friendly because the furnace is carbon-neutral.

When the EPA issued the second phase of stricter regulations for wood-burning furnaces last year, Lamppa’s furnace was the first to be certified. The Kuuma Vapor-Fire furnace is actually 40% cleaner than the EPA standard, averaging .093 pounds of particulate matter per one million BTUs.

“People think burning wood is probably not good for the environment,” Horihan said. “And when they burn filthy, yeah, they’re not good — they’re polluting.

“But Daryl’s furnace fully burns all gases off the wood before it goes out the chimney. Unless you heat with solar or wind, there’s no other way you’re heating your home carbon-neutral.”