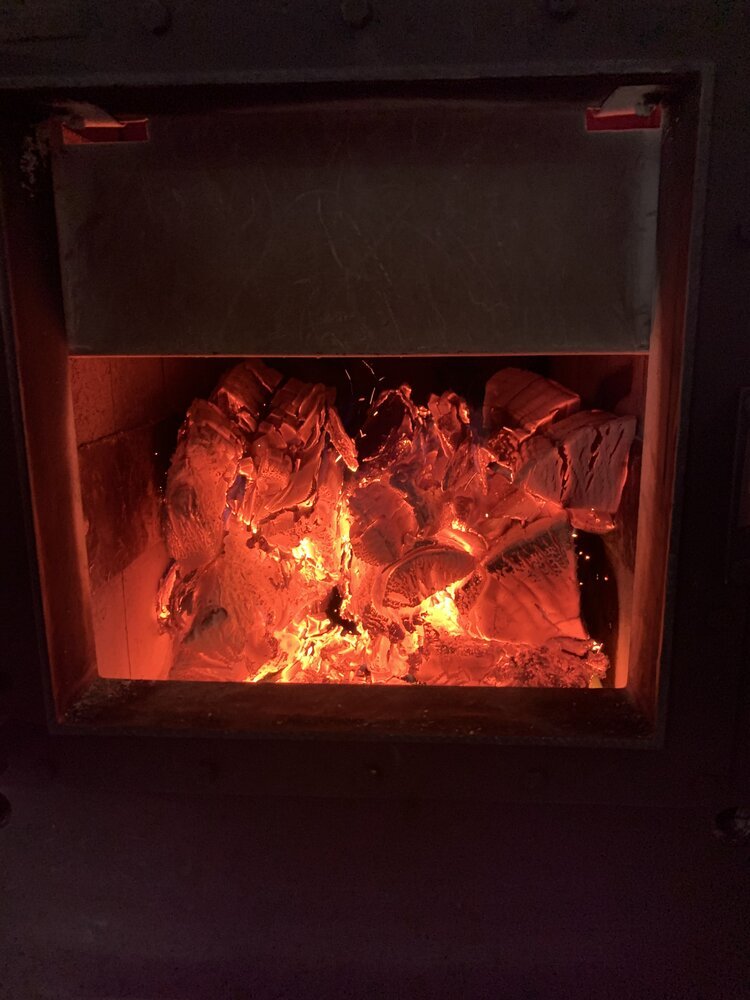 Well it’s March so I thought I’d give a review on my new kuuma vapor fire 100. I bought my house in the summer of 2019, cape cod 2000sf living space, built in 92 with average insulation R-13 in the walls and R-30 in the attic., Lp furnace was my heat source. After the first winter and over a grand in LP and always being cold with the thermo on 64-66 I started thinking about how to supplement my heat load, I had a 6” class A SS chimney coming through the block wall in the basement that had never been used before, after having it inspected and given the green light to use it for burning wood by a chimney pro I bought a wood/coal furnace……big mistake. After running up and down the stairs 500 times a day countless amount of time on the phone with the dealer and a not so happy wife who was still cold and 8months pregnant I decided to return it for a full refund. I found the hearth forum and was recommended by the other guys here to look at the kuuma by lamppa and the Drolet heat commander. after going back and forth on the two for a few months I pulled the trigger on the kuuma, I called lamppa in June of 2021 and talked to Garrett who before selling me the furnace put me on with dale so I could explain my set up, they were more concerned about having a happy customer then making a sale, wow! after talking with dale who said my set up would work I ordered the VF and had it installed by December. I can’t tell you how happy I am with it. January was cold here in Maryland all month long, highs in the 20s lows in the teens/singles my house stayed between 72-74 with the computer on low for 95%of the time, Only on cold windy days did I have to turn it up to medium. I was getting 10 hour burn times and not having to wake up to load at night and by morning the house was still warm and I would have a nice coal bed to load on. My wife loves it she is by no means an outside person but she will go down and load it, it’s so simple all you do is put wood in it and walk away the computer does everything no fooling around with air dampers it’s all electronically controlled talk about peace of mind. I cannot say enough about lamppa mfg, their customer service is on a whole other level, they gave me Dales personal cell in case I had to call him after hours and I did even on a Saturday and he picked up on the second or third ring you can’t find customer service like that anymore. I would recommend this furnace to anyone. I had no idea burning wood could be so simple. Thank you lamppa mfg.